ASMSU Arts and Exhibits presents In Memoriam, an installation by Willem Volkersz. The exhibit will be showing for the first time in the Exit Gallery October 19-30. There will be a free public artist reception Wednesday, October 21 from 5-7pm in the gallery. The Exit Gallery is the MSU campus gallery and is located in Strand Union Building room 212, Montana State University, Bozeman. Hours are Monday-Friday, 9am-5pm. For more information please contact Stacey Ray, ASMSU Arts and Exhibits Director at 406.994.1828 or exhibits@montana.edu. 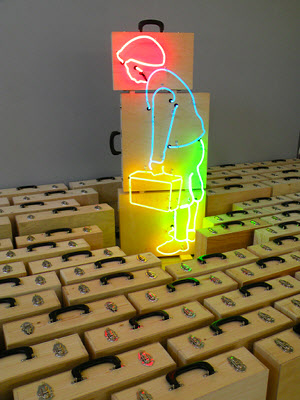 Artist Statement:
Several years ago, I learned that 165 students and former students from my elementary school in Amsterdam, the Netherlands, had died during the Holocaust. Although I did not start school until 1944, I feel a special kinship with these young people–we probably had some of the same teachers and their parents had the same passion for Montessori education as my family.

Much of my work as an artist has been autobiographical; my most recent solo exhibition (in 2008) was called Stories of War and Peace and dealt with my World War II memories and my family’s emigration to the US in the early 1950’s. Since life was difficult and because my parents were active in the underground (a number of Jews lived secretly under our roof), I grew up with a lot stories about the war. And, as kids, our lives were filled with the daily adventure of trying to take a shortcut to school by sneaking through a barbed wire barricade and with collecting Nazi helmets, broken rifles and spent cartridge belts we found in bombed structures.

In Memoriam consists of 165 wooden suitcases, one for each of the young people from my school who died in concentration camps. There are three sizes–the smallest for children 6 through 12 at the time of death, a medium size for teenagers, and a larger size for the two dozen who were in their late teens or early twenties. Many of the suitcase panels are made from plywood scrounged from the dumpster furniture factory where our son works. On each suitcase, I have painted the name of one of the children and the place, age and date of their death.

One additional component consists of a neon sculpture depicting a young, stooped boy carrying a suitcase (I have named him “Leo”). I am asking the staff at each venue that installs In Memoriam to interact with the work and to decide on how to display the 166 components. Whenever possible, I look forward to speaking about my family’s war experiences and the circumstances that led to the untimely death of these young people.